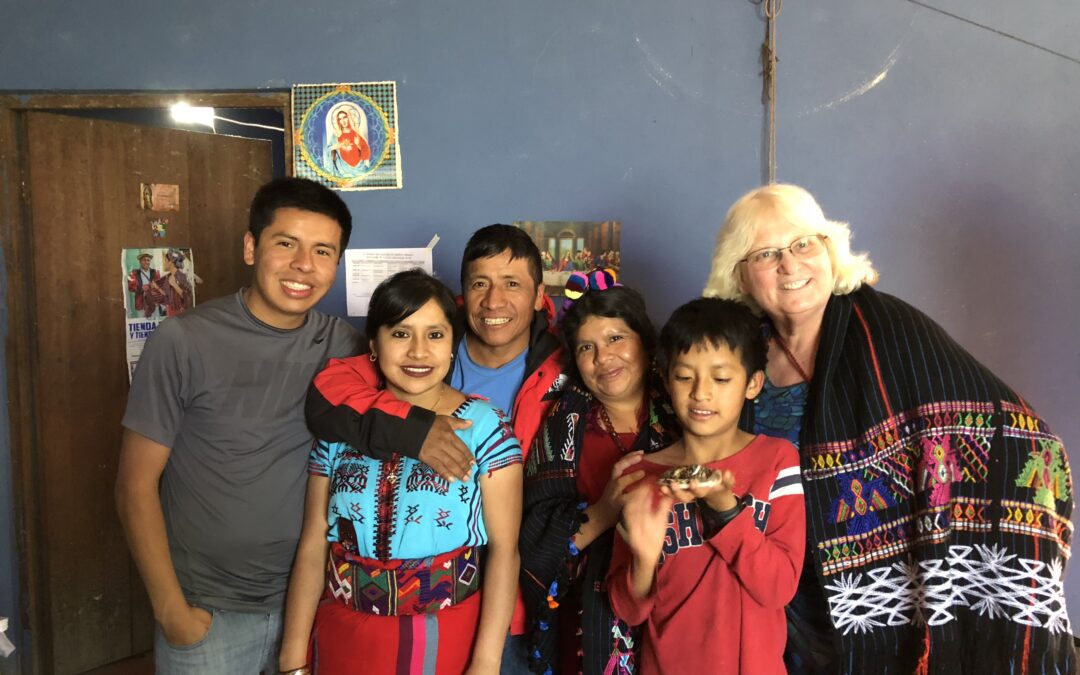 Thoughts on Guatemala and Chajul from Mundo Exchange Donor and Traveler, Phyllis Coyne

I can finally get access to internet today, so here is the first email that I wrote from Guatemala.

I think of my honorary nephew, Gabe, who was adopted from Guatemala often, as I see people who look very much like him.  He may be interested in some of these stories now or later.

Gabe: the boys here are handsome in the same way that you are and the children are great huggers like you.

Felice Semana Santa (Happy Holy Week). This is a family time with special food, many processions, masses and special activities throughout Guatemala.  When I arrived on Tuesday we went to the center of Guatemala City to see a procession in which groups of men or groups of women carried floats with ornately decorated statues of Jesus carrying a cross, Mary and John on their shoulders for many blocks.  One float weighed about 2 tons and require 56 men to carry it. The alfombra, bright “carpets” with religious and Mayan symbols made from colored sawdust, pine needles, fruits and other plants, which are created in the streets, are destroyed as the procession walks over them, but are recreated each day.   It is moving to see the alfombras and swaying floats weighing down the men or women in the midst of thick smoke from the incense.

Schools and work ended midday on the Wednesday preceding Easter and the country was abuzz with people traveling to be with their families for the holy days. Joan and I joined in the frey at 8:00 a.m. to get to her “Guatemalan home” in Chajul, an Ixil Mayan pueblo at 6,000 feet in the western highlands.  We were fortunate to be able to push and shove our way onto a chicken bus, albeit with 74 passengers on a bus designed for 36 people, for the 4-hour drive to our first stop, Quiche with my pack on my lap.  We were just glad that the chickens in the overhead storage area did not poop on on our heads. In Quiche, we squeezed into a micro (15 passenger van) with 34 others for 2 hours over twisty, mountainous roads to our next stop, Nebaq, then had the luxury of continuing in another 15 passenger van with only 24 people for an additional hour.

It was a joy to reach Chajul and be warmly greeted by our Ixil and Quiche Mayan hosts and their family at their posada (hostel), Vertz K’aol (welcome in Ixil).  Joan has been coming here to do work with her NGO, Mundo Exchange, for years and they not only think of her as family, they embraced me as family as well. I get hugged by all of them multiple times a day.

My very devote cousins, Judy and Paul, who pray for my soul, will be thrilled to find out that I participated in many Catholic masses, processions and other religious activities here.  In actuality, I was participating more in solidarity with the priests and nuns who are at the forefront of social justice work here and the Mayan Catholics who suffered for so long rather than as a renewal of my faith. (More on all that in future emails).  Even with my Catholic roots, the 2-hour long masses with the amalgamation of Mayan rituals (also called Mayan Catholicism), combined Ixil and Spanish languages, and Latino religious music were almost entirely foreign to me.  That being said, they were an eye-opening cultural experience and I was pleasantly surprised to see female catechists and altar girls.

Thursday:  Like the pilgrims who come here, we hike up San Andreas mountain, a sacred site which watches over the black Jesus statue in the church here- the oldest church in Guatemala and one of the oldest in Central America. However, our goal is the still active Mayan ceremonial site on the mountain, since this is also a time of many separate Mayan rituals.  After hiking, we go to a mass that includes washing of feet.

As tradition dictates on the day of the Last Supper, we are served only bread and atol (a homemade maize drink) by close Ixil friends of Joan who invite us for dinner.

Dia de Las Cruces (Good Friday):  The steep streets of Chajul are adorned with the 14 stations of the cross and alfombras- “carpets” of colored straw or natural objects forming elaborate religious symbols, which will soon be erased forever by the feet of the faithful.  We walk with two of Joan’s dear Ixil friends amongst hundreds of other colorfully and traditionally dressed Mayans, some of whom are carrying the statues of Jesus, Mary and John on floats in the 4-hour long procession. Long, lanky, strawberry blonde Joan and pale, Irish me stand out as the only non-Mayans, despite the care Ixil friends have taken to help us fit in by giving us huipiles (the traditional women’s shirt) and traditional earrings. At each station everyone kneels in the street, while sermons about social justice are given, prayers are offered, and special hymns are sung.  Meanwhile, dense clouds of incense from the the incense burners swung by altar boys and girls envelop us.  Many predominately fundamentalist Christian Mayans, who were mostly forced to abandon Catholicism during “the Violence” (more on that in a future email), line the streets to watch the procession.

Se Da La Luz (Saturday):  We gather at the cemetery just before dark armed with candles along with about 200 Ixil Mayans in preparation for a candle light procession in celebration of the resurrection. When it is dark, we all walk singing hymns and with lit candles many blocks to the church. Our candles fill the dark church with 200 plus flickering flames as we enter, then the flames are all extinguished and an impassioned sermon on the resurrection is given in the dark church.  The effect is profound.

Easter Sunday:  Joan and I go to the the 10:00 a.m. mass, because it is when many of her Ixil friends will be there.  The format of the mass, which was so novel to me several days ago is becoming more familiar.

A major reason for me to come to Guatemala is to meet Marta, the 14 year old, Ixil Mayan girl, who Shemaya and I are supporting to go to a private secondary school in a neighboring pueblo.  She is home in Chajul for Semana Santa, so I also spend time with her wonderful mother and father- who are both teachers- 4 lively and loving sisters, and baby brother daily.  The hokey pokey is such a hit with them that I almost get worn out by the multiple requests a day to do it with them.  Now both Marta and her dad, Gaspar, have written copies, so the pressure may be off.  The written copy of the hokey pokey is, also, a great way for me to help Marta read, pronounce and write some English.  She wants to be a doctor, so I added “Head, Shoulders, Knees and Toes” to her body part repertoire and she can already lead it, much to the delight of her parents and sisters.

Children in Guatemala, like so many children in 3rd world countries, often do not go to school or finish school, especially girls.  This interferes with the advancement of both the people and their countries.  Schools in Guatemala, as in many developing countries are free, but parents often cannot afford to pay for uniforms, school supplies, and books.

Shemaya and I elected to support a girl in secondary school through Joan’s nonprofit, Mundo Exchange, because all the money goes directly towards the child’s education- no administrative costs, unlike the majority of organizations who support children in foreign countries.  You, too, can help and get a tax write off to boot.  You probably won’t get letters from the children who can’t speak English or major reports about them like organizations with administrative costs, like Save the Children, may provide. Does that matter when you know you are making a difference in a life and maybe a culture?

Joan carefully thinks about who will get support.  For instance, Mundo Exchange supported a young woman to go to nursing school, if she would agree to use the money she made as a nurse to put her children through school.  She is.  Matteo, one young man that I met who Mundo Exchange put through school has since earned a scholarship to university.  I was moved to hear him say that he wants to return to Chajul as a lawyer and help his people negotiate contracts.  Many people here only speak Ixil and legal business is conducted in Spanish.  Those are just two examples of how Mundo Exchange is helping individuals and the culture.

Interested in sponosiring a student? Send us a message and we can give you more information!