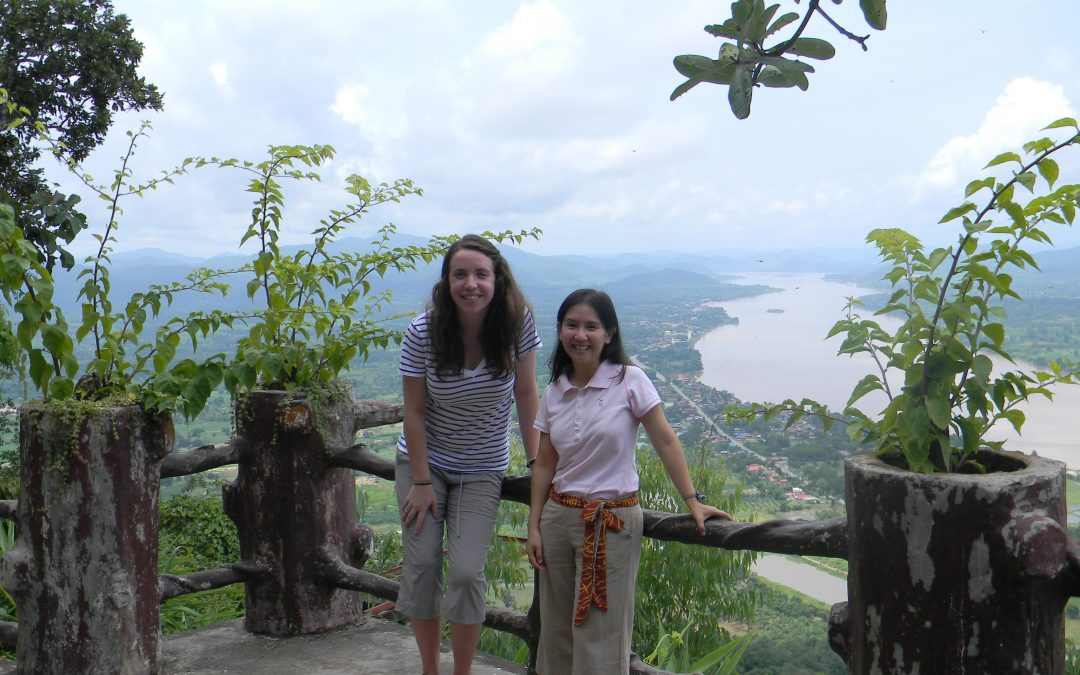 The following is a firsthand account from Annie, one of our volunteers who joined us in 2010. She spent a month in the village with a local family while co-teaching alongside the Thai English teacher at one of the rural schools in the area.

When I volunteered in Thailand I was able to experience the wonderful life with my home stay family.  Every day I would wake up and get ready for school, and the mother of the house would say, “Good morning!” – one of the few English phrases she learned during my stay.  I would respond, “Sawatdee don chao!” in terrible yet enthusiastic Thai.  We would laugh, and then I would sit down to have breakfast and coffee.  After that I would go off to school, returning at some point in the afternoon.  Our afternoons were never dull.  The mother of my Thai family not only cares for the son of her own son, who works in Bangkok and cannot care for his child during the work week, but she also takes care of some of the other children in the neighborhood in the afternoon while their parents are at work.  This is not an atypical family situation in Thai villages. 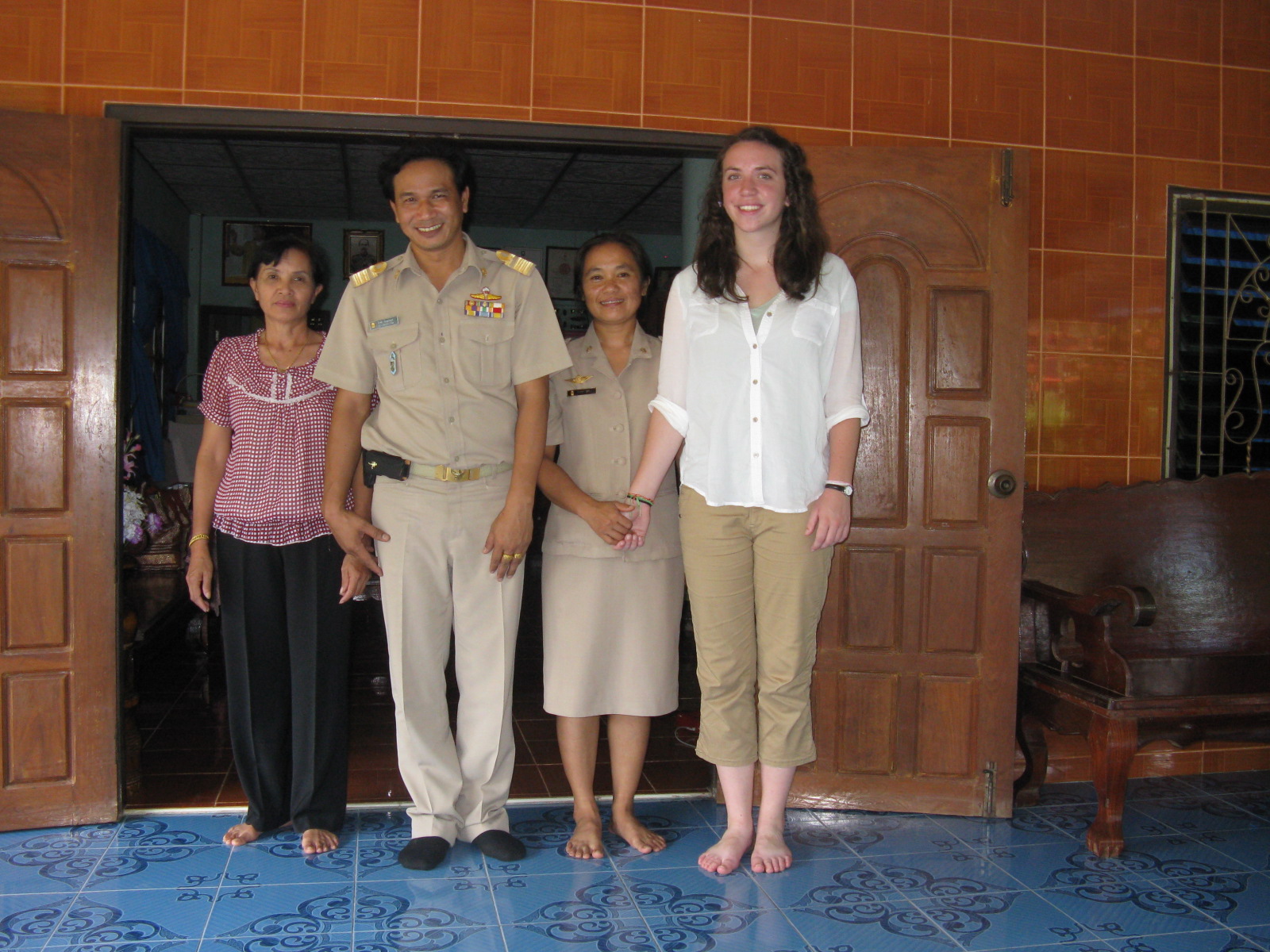 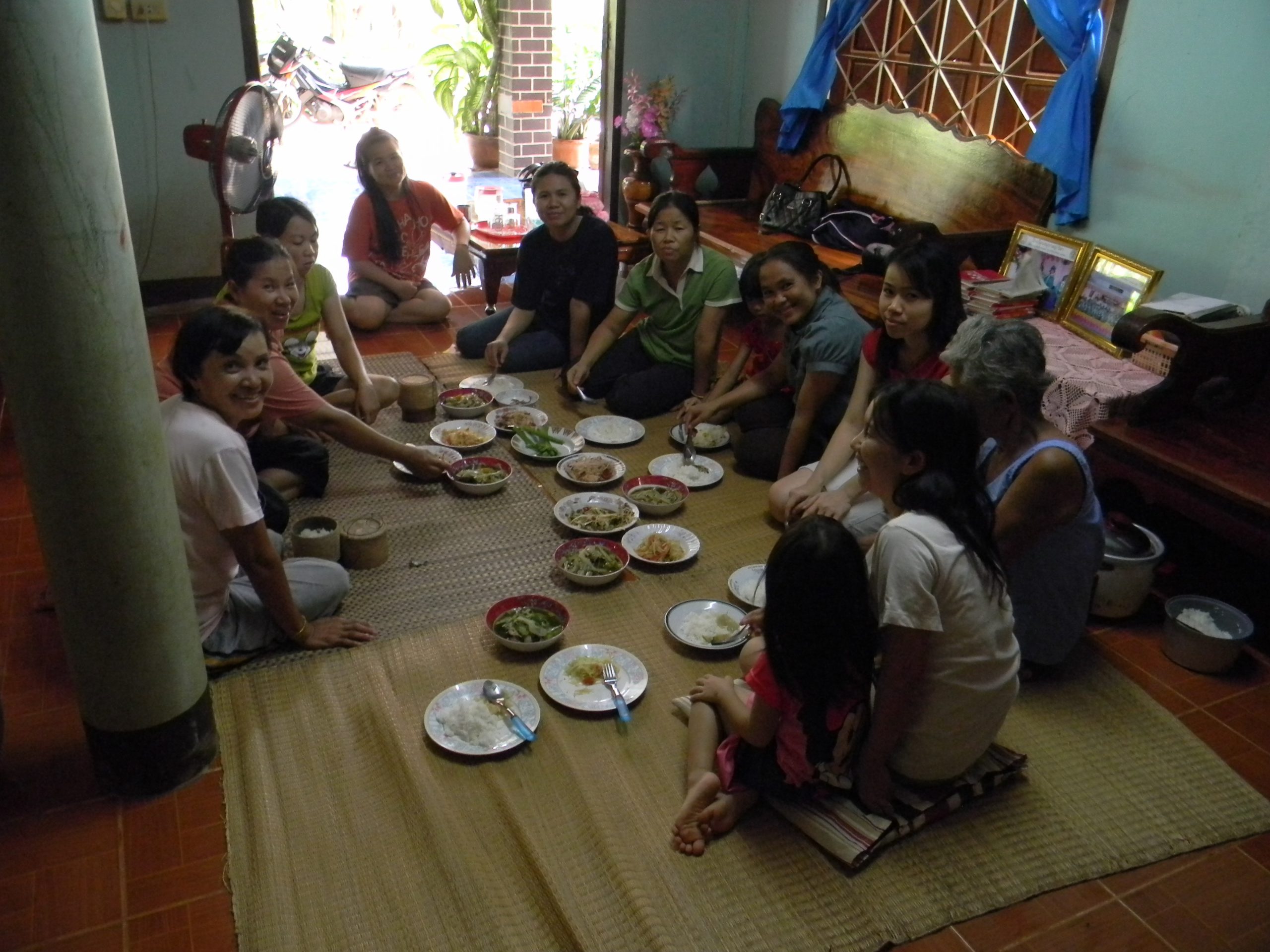 What made things forever entertaining in my home stay family life was that the members of the family have varying English speaking abilities.  The older sister in my family, Jan, speaks English pretty well and was very willing to help me communicate with everyone else in the family, who did not speak any English at all.  Even though Jan and I did not always understand each other easily, we had so much fun talking and joking together.  I now think of her as a close friend.  However, Jan was only home in the mornings and the evenings.  I would come home from school in the afternoon, and for several hours I would spend time with my home stay family just listening and smiling, unable to really communicate.  But this was a blessing.  Feeling mute in the afternoon spurred me to work hard and study Thai with Mae, the mother of my home stay family.  While I never became very good at the language, these lessons in the afternoon certainly made me closer with Mae.  Sometimes other people from the neighborhood would come to learn English too!  When we all felt we could not learn any more, we would play with Nick, Mae’s grandson, and his friends from the neighborhood.  We would play games, draw, hula hoop, watch cartoons, and eat, eat, eat!

Once Jan and her brother came home from work, we would all sit on the floor and eat a delicious Thai meal together.  The family was incredibly tolerant of my vegetarian diet, and went out of their way to make sure I had plenty of great food to eat.  My love of Mae’s food even drove me to promise to fly her to America if I become rich and help her start a Thai restaurant, so I am crossing my fingers that this promise is realized.  During dinner we would watch Thai soap operas and the news, and just enjoy each other’s company.  My family shared their lives with me so completely, and showed me kindness beyond anything I could have imagined.  Compared to my life in America they did not have much, but they were always so generous to me.  I have never met such good hearted people in my entire life.

Everyone I met in Somhoung embraced my desire to learn about Thai culture.  Students came into the English classroom, armed with dictionaries and Thai-English textbooks, to ask about my family and share stories about theirs.  Faculty and staff talked with me at the lunch table and everyone readily explained things when I asked, which was often.  Every night, the older sister of my Thai family would teach me about Thai customs, translate the news for me, teach me about Thai history and the monarchy, and answer any questions I had from the day about Thai ways.  And everyone tolerated my feeble attempts to speak, and subsequent butchering of, the Thai language.  Everyone was always warm, patient, compassionate, and understanding.

In my regrettably brief study of the Thai language so far, I learned that to say “I understand” in Thai, directly translates as something along the lines of “It entered my heart.”  And while I am not sure I truly do understand the people of Somhoung as well as I would like, I understand some, and they all have certainly entered my heart in one way or another.  I now happily reminisce about all the memorable things I have done.  Over the course of a month I have seen three different local Thai schools and have been to four large assemblies, where I was expected to take part but could not understand what was being said or asked of me.  I would imagine I have met around thirty directors of local schools, many of whom, despite their education and professionalism, were giddy and eager to have their picture taken with a farang.  I have received an award that I cannot read and subsequently have no idea what it is for.

I have been to a Thai baby shower, a retirement party, and a funeral.  I have taken many showers from a bucket.  I have killed countless number of bugs, which will most definitely contribute to my being reborn as one – my home stay family is certain.  I have been to five local wats and prayed with my family, as well as helping them prepare for Isaan ceremonies.  I have been asked about my American family life in some unusual ways: whether my mother is fat, whether my brother is married and/or likes Thai women, and many somewhat offensive but certainly hilarious questions about the farang diet.  I have ridden to school on the back of a motorcycle several times, incredibly awkwardly – to the great amusement of the on looking students.  I have publicly spoken in a language I do not know to over three hundred and fifty students and teachers – three times.  I have sang alone to classes so many times that I no longer possess the ability to feel ashamed of my singing voice.  I have been left alone in the English classroom a few times, helpless to say anything but “Ow eeg mai?” – meaning “Again?” – and causing the poor children to have to sing “Itsy Bitsy Spider” five times in a row.

I cannot begin to touch on all of the wonderful, lovely, and hilarious memories I have from my experiences over the past month.  The culmination of it all was a beautiful Isaan traditional ceremony called a “bai sii su kwun” during which the entire school gathered to honor my departure.  Everyone from my school, as well as some other members from the local community, came together and tied strings around my wrists as they wished me good luck on my journey.  The palpable energy I could feel during that time is ineffable, but almost brought me to tears. 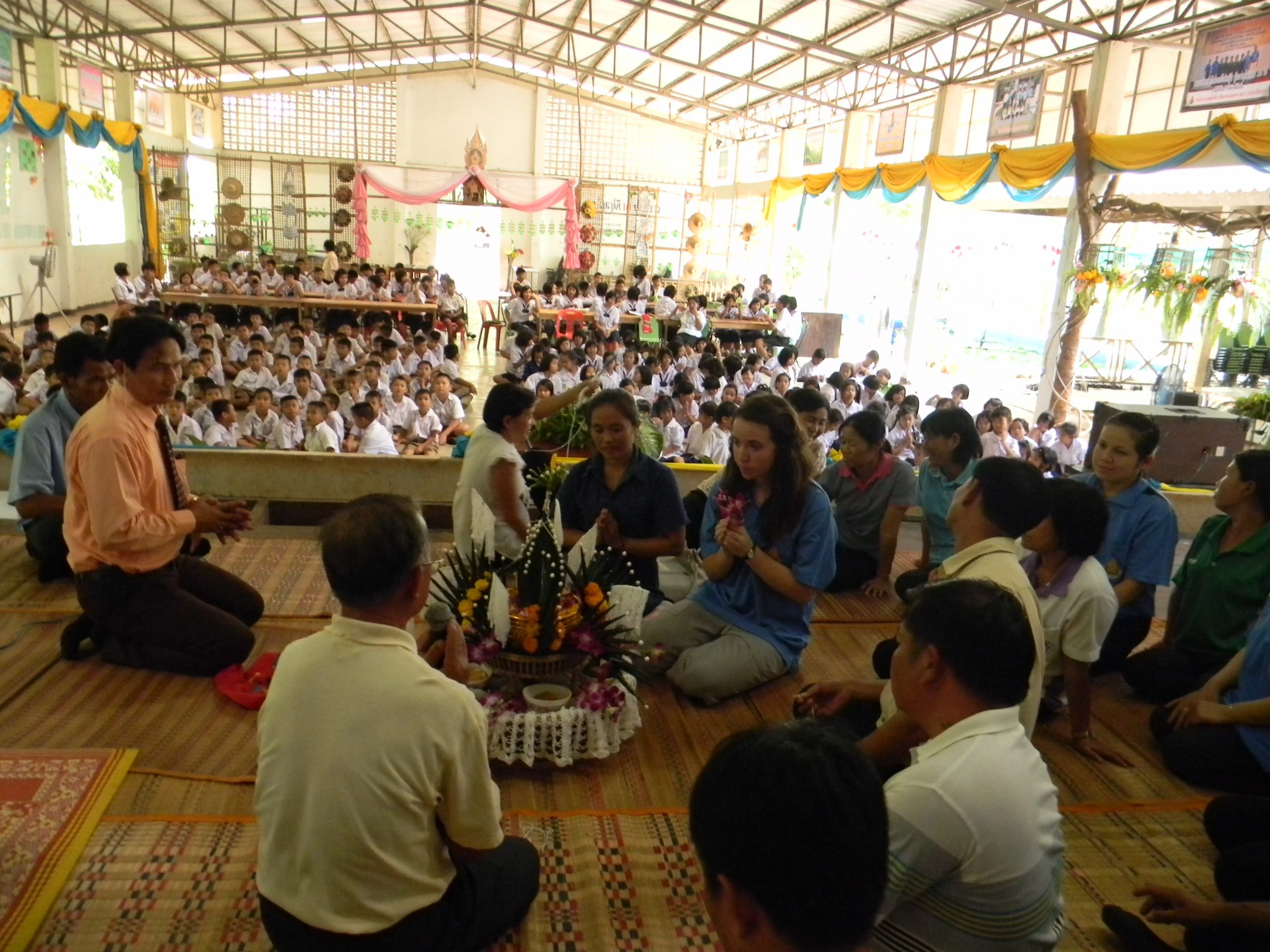 These caring, generous, and kind hearted people showed me so much love, and I struggle to articulate my feelings for them.  I treasure all of the time I have spent at Ruammitwitthaya School and living with my Thai family, and will never forget it.  I am now overcome with a painful feeling of homesickness, this time not for America, but for life with my Thai family and the wonderful people of Somhoung.